Deaths from tobacco four times higher worldwide than from virus

The graphs below used the official deaths attributed to Covid-19 in 2020 for the UK and the world to compare it to deaths caused by Tobacco.

The reason I have been comparing Covid-19 attributed deaths to other causes is to give some perspective to the data. Absolute numbers on a daily death toll splashed across news outlets mean nothing unless they are given context. I totally understand people who panic when they see these numbers – I definitely did!

I must stress that every death is tragic. It is precisely for this point that the numbers should be scrutinised in a calm, logical and grown up manner, so that we can decide on policies that truly help the largest amount of people. Creating unnecessary anxiety and fear because there is no context given to the numbers of deaths we see on the news every day is very damaging in itself.

Heart disease kills 170,000 people every year in the UK and is the biggest cause of death; cancer is second and kills on average 165,000. However, I have not noticed any cumulative daily death tolls in the media for either of these, despite them having killed many millions of people in the last 20 years. On the other hand, Covid-19 was attributed to 75,000 deaths in 2020, a far lower number, yet we are reminded of the deaths daily. It has also only been around for a year.

Therefore, in the 21 years since 1999, Tobacco is likely to have killed over 2 million people in the UK. This is a number 27 times as high as those who have been killed by Covid, officially. As I have said in previous articles, virus outbreaks rarely last for more than a couple of years. This novel type of coronavirus may be different. It could well stick around for much longer, but at the moment it is behaving like viruses do.

It could be argued that, for Covid-19 to pose as big a threat as Tobacco, it would need to kill 75,000 people a year for over 25 years into the future. How likely is this? Very unlikely. However, it is ‘excess’ deaths from the yearly average that are said to be overwhelming health systems across the globe. I will look at this in future articles. 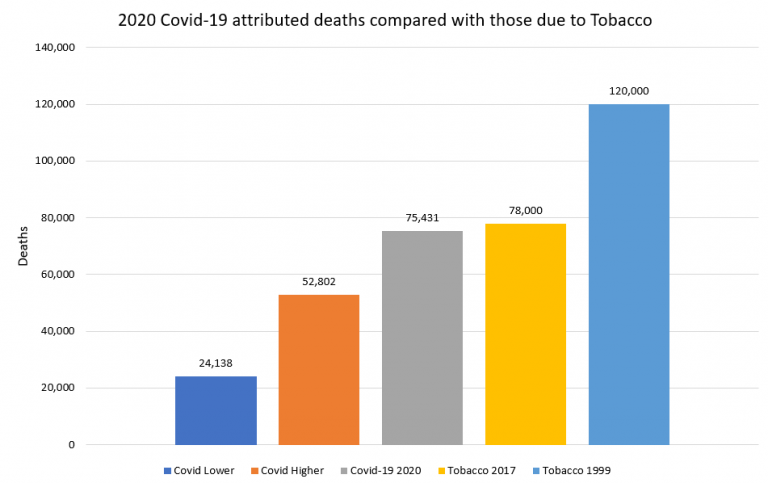 Figure 1. UK deaths attributed to Covid-19 compared with Tobacco. As the official figures for tobacco related deaths in 2020 have not been made available yet, I used the figures for 2017 and 1999 which came from official reports. The middle grey bar, titled ‘Covid-19 2020’, is the number of Covid-19 attributed deaths in 2020. The blue and orange bars, titled ‘Covid Lower’ and ‘Covid Upper’, are the adjusted deaths using the upper and lower limits for percentages of Covid-19 attributed deaths that are likely to actually be caused by the virus themselves. A full explanation of this can be found here.

It remains to be analysed why some countries have been affected by the novel virus much more than others. For example, in the whole of 2020 there were a total of around 70,000 deaths in the whole of Africa, a continent home to 1.21 billion people. However, I will try and answer this question in future articles. For now I included these statistics to introduce some perspective to the relative threat of Covid-19 worldwide. 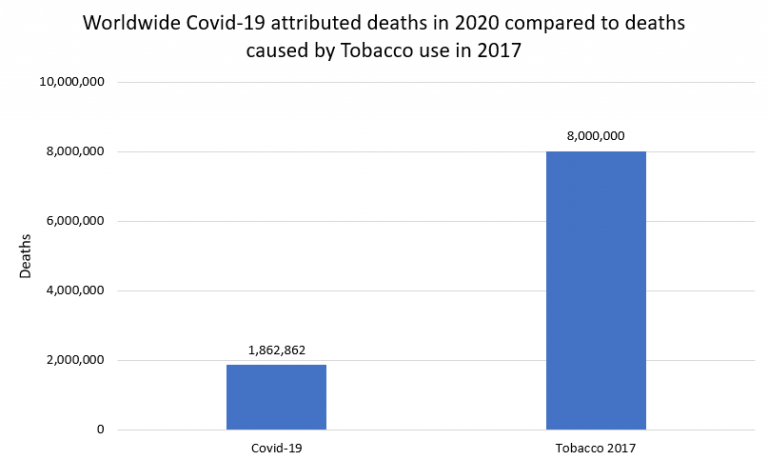 Figure 2. Worldwide Covid-19 attributed deaths in 2020 compared to those attributed to Tobacco in 2017.

Do you think this gives a good perspective? Leave your comments below.

All Posts »
PrevPreviousCovid-19 Part 22:
Extensive lockdown harm “ten times greater than benefits”
NextCovid-19 Part 24:
You are 3x more likely to die on the roads if you are under 60 and healthyNext