This article compares Covid-19 attributed deaths to other leading causes of death in the USA. The next entry will look at how the US and the UK fare when compared to other countries.

Compared to the average total of 2.85 million total deaths in the USA every year, those officially attributed to Covid-19 (370,000) accounted for 13% of this figure.

13% is the same percentage of the total that Covid-19 deaths accounted for in the UK. My very rudimentary model predicted around 200,000 deaths in the USA in 2020. As this number has now been surpassed greatly, it may be true that at my time of writing, the virus had not spread throughout the US population as extensively as in the UK. 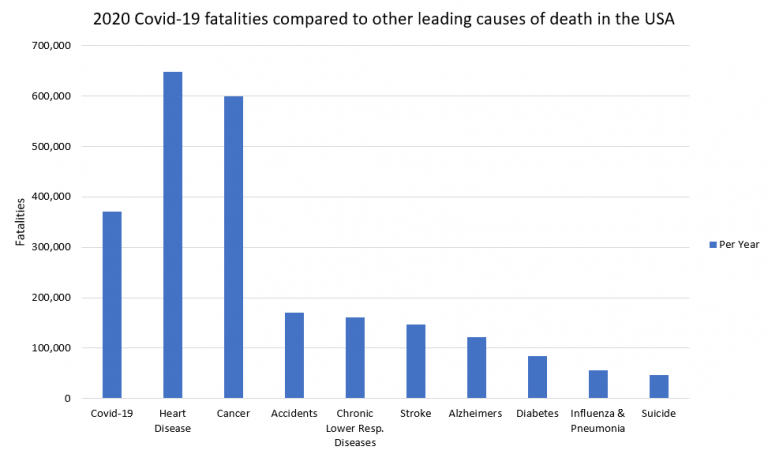 It is worth remembering that the numbers for the other leading causes of death are not the official 2020 figures but an average from the past 5 years. I could not locate the official statistics for these, but once they do become publicly available I will write an updated article.

Also of interest is the fact that other causes of death are year-on-year. On the other hand, virus outbreaks are known to be much more short-lived. Therefore, since 2000, there could have been as many as 10 million deaths from Cancer and 12 million from Heart Disease in the USA. This dwarfs those from virus outbreaks. 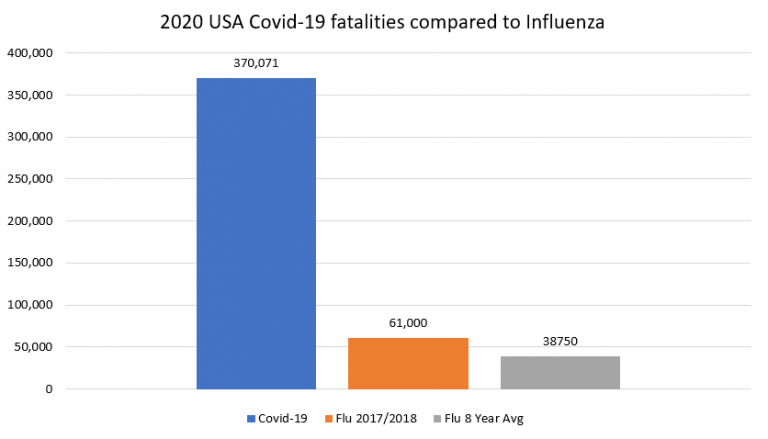 Figure 2. Officially reported total USA Covid-19 deaths in 2020 compared to Influenza, or seasonal ‘Flu’. Included is the official estimate of deaths from Flu in 2017/2018 winter season which was estimated to have killed up to 95,000 people. The grey bar is the yearly average from 2012 – 2020.

2. Adjusting for bias in attributing deaths to Covid-19

These figures could be over-estimates of the fatalities actually caused by Covid-19. As I explained in a previous entry, there are problems with how deaths are attributed to Covid-19 in many countries. One study from Romania suggested only 37% to 55% of deaths officially attributed to covid appeared to actually be caused by it. It showed that a further 20% to 28% were accelerated by weeks or months. That left 17% to 27% of deaths actually caused by Covid-19.

The World Health Organisation (WHO) guidelines on covid: “a death due to COVID-19 may not be attributed to another disease (e.g. cancer) and should be counted independently of preexisting conditions that are suspected of triggering a severe course of COVID-19.”

Most countries around the world adhere to these guidelines. It means that if someone has diabetes or a heart disease, and dies after contracting Covid-19, their death can only be attributed to the virus.

Figure 3 and Figure 4 are versions of the above graphs that include the adjusted Covid-19 death figures using the upper and lower limits as explained above. Even though the USA uses the WHO protocol as explained above, I used the conservative percentages of deaths actually caused by covid as used in my previous post on the UK. This is a range of 32% to 70% and it describes the amount of Covid-19 recorded deaths that are likely to have actually been caused by the virus and not by other causes of death.

This results in a number of deaths between 118,000 and 260,000 that can be attributed to Covid-19 with more confidence. I compare this range to the other causes of death below. 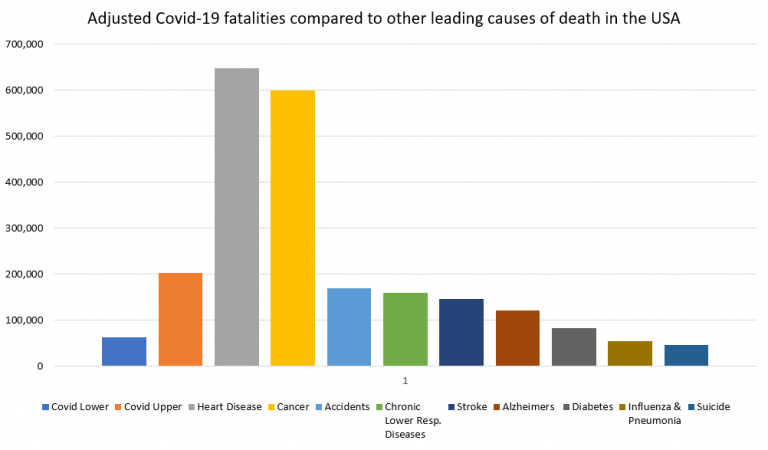 Figure 3. Covid-19 deaths, adjusted to address the fact that a percentage of deaths were found in a study to be not caused primarily by Covid-19. We used an upper limit of 55% and a lower limit of 17%. These were obtained by using the range of percentages found in a published study that found as few as 17% of officially attributed covid deaths could actually have been caused by Covid-19. The rest were from other causes, or accelerated by weeks or months. 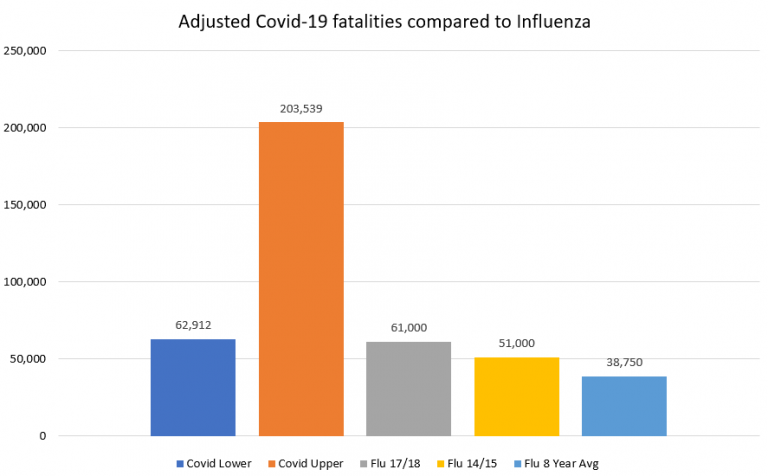 It is important to note that the comparison figures are constant, i.e they are causing that number of fatalities year after year after year. In contrast, virus outbreaks such as the current pandemic, are short-lived.

Also worth consideration is that many of these problems also have a significant and lasting effect on people’s lives. For example, nearly two thirds of stroke survivors in the UK leave hospital with a disability. Globally, of the 15 million people who suffer a stroke every year, over 5 million die and 5 million survivors are left permanently disabled.

This coronavirus is a novel virus against which our bodies have not built up immunity, meaning it spreads very quickly among us. There is still a large amount of uncertainty how many people have been infected, which means it’s hard to effectively model the true ‘death rate’ to properly assess how dangerous it is.

The figures in this study show that covid remains far behind heart disease and cancer in terms of the threat it poses to americans. This is not, by any means, saying it is not a nasty virus. It is.

The reason I started these blog posts was because I wanted to understand the exact scale of the threat we are dealing with. A daily death toll on the news is enough to scare anyone but without official comparisons to other causes of death, it is hard to truly distinguish between hysteria and justified alarm.

A reason why Covid-19 has caused a large amount of alarm is partly due to the speed with which it spread through society. As a new virus that know one knows about, there is no vaccine or immunity built up by the population. However, the transmission rate and death rate are two very different things, but they are two concepts that are often mixed up in public discourse.

Do you think this gives a good perspective? Read the next installment in the Covid-19 Review here, which delves into the issue of ‘true’ mortality rate.